Cosmology is a very peculiar science since it aims at studying the Universe as a whole. It thus often lies at the frontiers of science, philosophy and metaphysics.

It is the theory of General relativity, established by Einstein at the beginning of the 20th Century, which has allowed to introduce the study of the Universe from a scientific point of view. Thanks to a number of simplifying assumptions (e.g. that on a very large scale, matter and energy can be considered as homogeneously distributed), on derives relatively simple equations, the Friedmann-Lemaître equations, which predict that the Universe is expanding. This expansion was confirmed at the end of the 1920s, with Hubble's discovery that galaxies move apart from each other with a speed proportional tio their distance.

Thus, the Universe would have originated in a very dense and very hot state, which was named the Big Bang. This Big Bang model was dramatically confirmed in 1964 when Penzias and Wilson discovered the cosmic microwave background, which is a relic of a earlier phase when the Universe was about 1000 times hotter than at the present epoch.

However, in order to explain the motions of stars in galaxies, and of galaxies themselves in clusters, it has been necessary to postulate the existence of an unknown form of matter, which does not emit light and is therefore detectable only through its gravitational effect, the famous « dark matter ». This dark matter would be 5 to 6 times more abundant than ordinary matter, made of atoms and molecules.

Moreover, to explain the acceleration of the expansion of the Universe, discovered at the end of the 1990s, cosmologists have postulated the existence of a new form of energy, the so-called « dark energy », which would be the dominant form of energy on a cosmic scale.

The currently favoured cosmological model thus predicts that 95% of the content of the Universe is constituted of « exotic substances » invented to explain cosmological effects not predicted by the basic theory, and still unidentified despite ambitious theoretical and observational research projects. 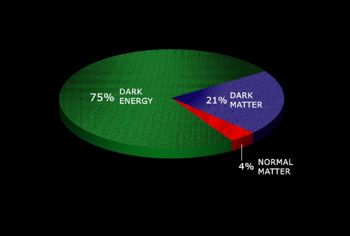 eneral relativity predicts that light rays are deflected in the vicinity of massive objects. This prediction was verified for the first time during the 1919 total solar eclipse, which allowed to observe a slight modification of the apparent position of stars close to the solar limb, due to the gravitational field of the Sun.

If the light source, the massive deflector and the observer are sufficiently well aligned, this phenomenon can give rise to multiple images of the source, producing a so-called « gravitational mirage ». The deflector is called a gravitational lens. 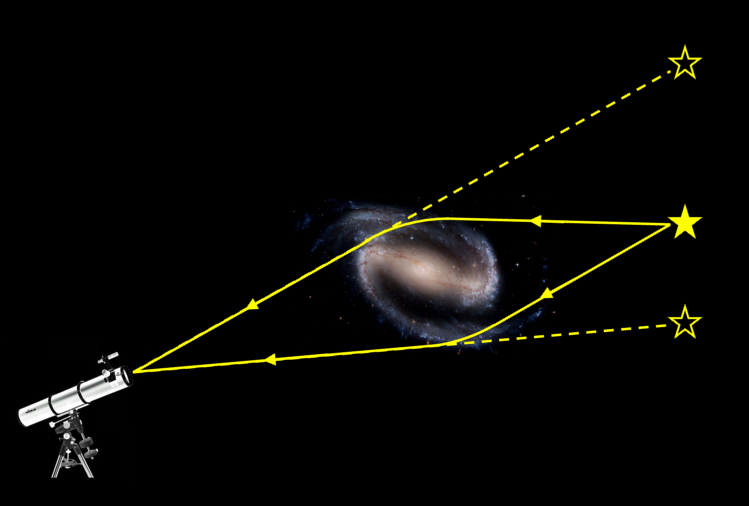 However, in order to produce multiple images with a separation large enough to be observed with a telescope, the mass of the deflector must be very large: e.g. a whole galaxy.

The light source must thus be located very far, behind a massive galaxy, and must be sufficiently bright to be visible at very large distance.

Quasars, which are the most luminous objects in the Universe, are very well suited as gravitational mirage sources of light. The first gravitational mirage was discovered in 1979, when astronomers realized that two apparently distinct quasars, separated by a mere 6 arcseconds on the sky, had the same spectra. Further observations showed that they were, in fact, two distinct images of a single quasar.

Since then, a few hundreds of multiply imaged quasars have been discovered, several of them by the Liege team. Among them is the famous « cloverleaf » (Magain et al. 1988, Nature 334, 325), for which four images of the same very luminous quasar are detected.

However, quasars are not the only sources which may be subject to the gravitational lensing phenomenon. When the source is extended, its images are generally arc-shaped. Very spectacular giant luminous arcs are observed when the light from background galaxies is deflacted by very dense galaxy clusters.

When the alignment between source, lens and observer is nearly perfect, the image may appear as a ring, called the « Einstein ring ». 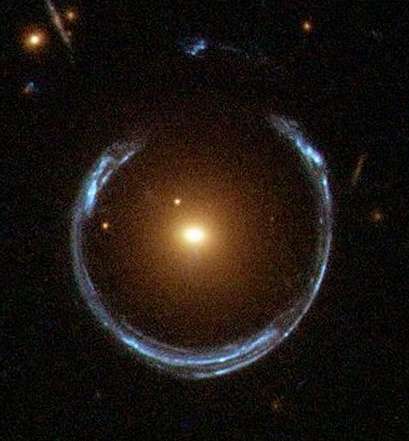 When the source of light is variable, which is the case for most quasars, a photometric monitoring of the gravitational lens system allows to determine the time delay between the different images of the same object and, subsequently, to measure the distances to the source and the lens. The allows to obtain distances to very remote objects without having to rely on multiple steps, as in the traditional methods based on « standard candles » such as Cepheids and Supernovae. Gravitational lenses thus offer an alternative method to determine the cosmological parameters such as the Hubble constant, which measures the expansion rate of the Universe. This is the main aim of the COSMOGRAIL international collaboration.

Alternatively, once the Hubble constant is obtained by other means, gravitational lenses may be used to measure the mass of the lensing galaxy, including dark matter. Gravitational lenses are thus a powerful tool to probe dark matter in the Universe and, in the first place, to confirm or reject its existence. This method has allowed us to cast doubts on the existence of dark matter halos around lensing galaxies. To explain this result is a major challenge for modern cosmology.