The acceleration of particles in astrophysical environments is a major question at the forefront of high energy astrophysics. The most famous cosmic particle accelerators are objects in quite extreme conditions such as supernova remnants or relativistic jets in extragalactic objects. These particle accelerators are responsible for the production of cosmic-rays (high energy charged particles such as electrons, protons, helium ions, heavier ions...). It is usual to distinguish cosmic rays of Galactic origin (below the knee in the spectrum shown below) or extragalactic origin (beyond the knee), even though this separation is still a matter of debate.

Even though the intrinsic efficiency of pre-supernova massive stars is not expected to be as high as that of supernova remnants (SNRs), for instance, their contribution to the production of low energy (below GeVs) Galactic cosmic-rays may not be negligible. A first interesting class of objects is that of particle-accelerating colliding-wind binaries (PACWBs). These systems are mainly identified as particle accelerators on the basis of the detection of synchrotron radio emission (requiring a population of relativistic electrons). In these systems, the particle acceleration process is believed to be Diffusive Shock Acceleration (DSA) in the region where the stellar winds of the two massive stars collide. The physical conditions ruling the acceleration process are thus dictated by the stellar wind properties, and are expected to vary as a function of the orbital phase if the orbit is eccentric. A second interesting class is that of the so-called Bow Shock Runaways (BSRs). Massive runaway stars (ejected from their formation site) are likely to cross various interstellar regions. Along their way across interstellar clouds, their strong stellar winds will interact with the surrounding interstellar material and produce shocks. In the presence of these hydrodynamic shocks, the DSA mechanism can operate and accelerate particles. 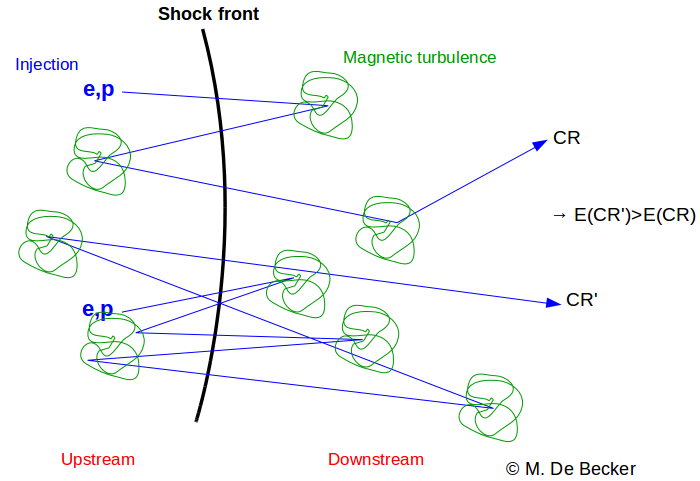 Schematic view of the DSA mechanism.

An important feature that deserves to be emphasized is that these sources are non-thermal emitters. Relativistic electrons can produce synchrotron radiation in the radio domain (and in some extreme cases up to X-ray) and non-thermal X-rays through inverse Compton scattering (and potentially relativistic bremsstrahlung). Relativistic protons can interact with thermal material and produce neutral pions that decay to produce gamma-rays. These particle accelerators can thus be probed through non-thermal radiation produced across the electromagnetic spectrum. Such multiwavelength studies are at the centre of the activities of this group.

A related topic is the study of the influence of cosmic rays generated by massive stars on the energetic processing of molecules of astrochemical interest. This is especially relevant in dark clouds where photochemical processing is not active. All galactic particle accelerators (SNRs, PACWBs, BSRs...) are likely to contribute to the overall population of cosmic-rays that play a decisive role in the origin of the astrochemical diversity in molecular clouds. 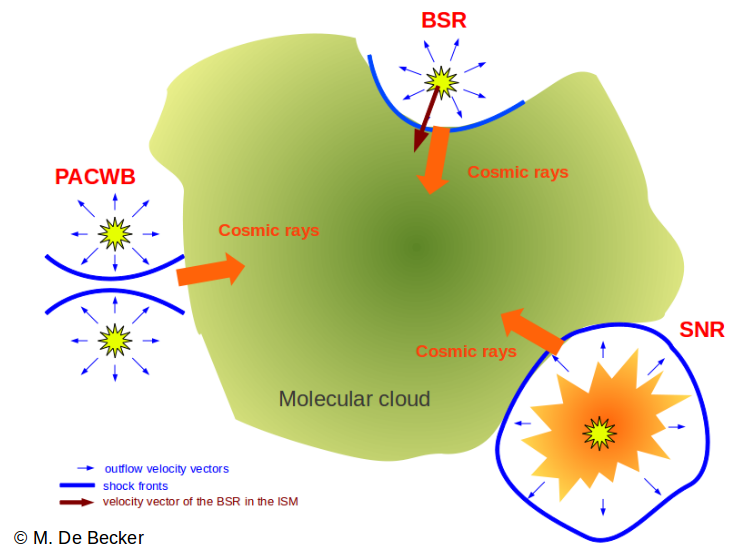 Schematic view of a molecular cloud, in the presence of sources of cosmic-rays such as a BSR, a PACWB and a SNR. Figure taken from De Becker 2015, Bull. Soc. Roy. Sci. Liège, 84, 15.

The observation of the Universe in the radio domain started in the 1930s, after the unexpected detection of radio waves from the Galactic Centre by Karl Jansky in 1931. Following that discovery, the first dedicated sky observations for astrophysical purposes revealed a radio emission dominated by non-thermal sources, i.e. astronomical objects emitting radiation from relativistic electrons (accelerated up to velocities very close to the speed of light). This early discovery showed that a lot of astronomical environments are able to accelerate particles up to relativistic velocities, opening up the field of high energy and cosmic-ray astrophysics.

Since then, many highly efficient radio observatories have been built throughout the world, and operate almost 24 hours a day. Several world-class radio observatories operate in interferometric mode, allowing one to combine the signal collected by tens of antennas. 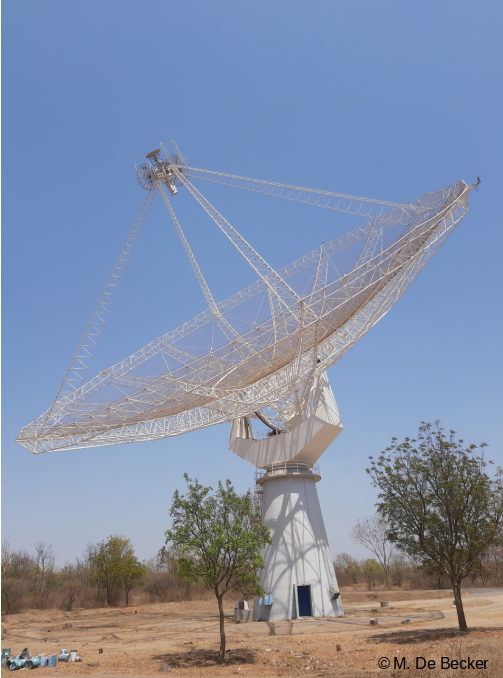 One antenna of the Giant Metrewave Radio Telescope, India.

The investigation of non-thermal sources is based on the measurement of synchrotron radio emission. This radiation is produced by relativistic electrons in helical motion about magnetic field lines. This emission is thus used as a proxy for particle acceleration in astronomical sources. Galactic synchrotron radio emitters are typically supernova remnants, massive binaries at various stages of their evolution, or some young stellar objects. At the extragalactic scale, these emitters are mainly active galactic nuclei and galaxy clusters. Radio measurements constitute therefore a powerful tool to identify non-thermal sources, and thus particle accelerators in general.

Beside synchrotron emission, the radio study of astronomical objects allows one to investigate their potential thermal emission. This emission is produced by (non relativistic) free electrons undergoing an acceleration in the presence of protons or other nuclei in a plasma. This notably happens in thermal jets of young stellar objects or in stellar winds of massive stars. These objects can thus be composite sources, presenting both thermal and non-thermal radio emission. Radio investigations can thus provide a wealth of information about these objects. 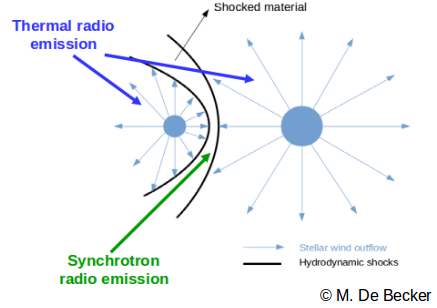 Schematic view of a massive binary presenting both thermal and non-thermal radio emission.